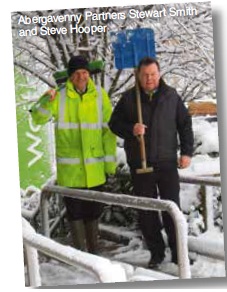 Abergavenny and the surrounding areas were subject to a rare Met Office red weather warning when the snow fell.  DM John Williams picked up on the weather warning the day before and had put a contingenecy plan in place.  Branch Manager Tim Winchgrove said: “Understandably there were a number of Partners who, despite their best attemps to get into work, were defeated by the elements; there was also many fine examples of Partners whose grit and determination shone through and ended up in success”, SM Steve Hooper and Partner Stewart Smith met up early that norning to get to work from Newport.  They caught a bus to Newport Station, then a train to Abergavenmny and then walked a mile and half in the wind and snow to ensure the branch could still trade.