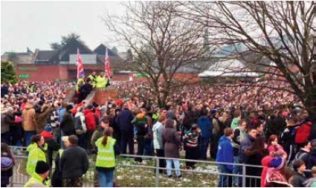 Last week Ashbourne Partners locked and boarded up the branch to make way for the town’s unique annual Shrovetide event.

The Royal Shrovetide Football match takes place over two days – Shrove Tuesday and Ash Wednesday.  It involves a controversial game of ‘football’ between two towns in Derbyshire.  It is played with a special ball, larger than a normal football, which is filled with cork-enabling it to float when it falls into the river.

Branch Manager Richard Morgan explains: “Ashbourne gets boarded up with wooden panels before the ‘Shrovetide’ event and closes its doors at 1.30 pm on both Shrove Tuesday and Ash Wednesday.

It is very unusual that any branch would close.  However, there are around 10,000 people who attend the event.  The event has been taking place annually since the 12th century.

The game is played over two eight-hour periods with goals that are three miles apart from each other.  The ball can be kicked, carried or thrown – and there are far fewer rules than in a regular game of football.