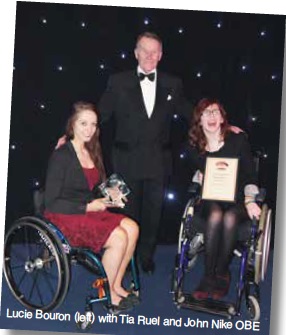 Two Partners from our Bracknell branch have been recognised for their contribution to the local community in the Pride of Bracknell Awards 2013.

Customer Service Assistant Lucie Bouron was named Young Sporting  Champion, while BM Graham Oakeley was volted as Retail Hero.  Both were nominated by readers of the Bracknell News, which sponsors the awards together with the Bracknell Regeneration Partnership.

Lucie, who is a member of the elite GB training squads for wheelchair basket ball and wheelchair table tennis, hopes to compete in the 2016 Paralympics and commented, “It’s really good for everyone to be recognised and its an inspiration for other people to get more involved.  I’m honoured to win the award and to be recognised for what I am doing”.

Graham who was awarded his accolade for successfully developing the branch since it opened and the part he had played in the community, added: “The reward isn’t for me, but for the Partners in Bracknell.  The success of the branch has been a team effort down to 180 Partners there, plus a larger team from Head Office”.

“These awards are a really good opportunity to celebrate the fantastic individuals who make Bracknell special.  I am very humbled to receive this award alongside some truly outstanding people from Bracknell community”.

The awards were presented at a gala dinner and ceremony at Bracknell and Wokingham College at the end of April.