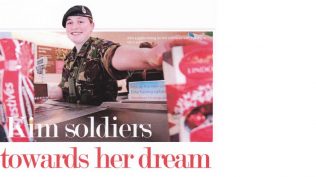 It’s fair to say that Team Leader Ambient Kim Chandler from Caversham is positively soldering towards her goal of joining the Army, having just completed basic training with the 7 Rifles, Armed Reserve Forces.

SM Personnel Sue Ruhle explains: “Kim has always wanted to join the regular Army and this was a way of testing the water”.

For six long weekends and two whole weeks, Kim underwent intensive training that included loaded marches, sleeping under canvas in all weathers – including snow – endurance runs, learning how to strip and clean a gun, using a bayonet and completing an assult course, overcoming obstacles such as 12ft wall.

“The worst bit was probably being woken up at 5am every day!” admits Kim, whose proudest moment was her passing out day.  This took place after the final task of training, a six-mile march while carrying 15 kilos; Kim completed it in one hour and 20 minutes, 10 minutes inside the required one-and-half hours.

Now she plans to be a Skill at Arms instructor after her fellow soldiers-in-training nicknamed her Assassin.  “She was a bit of a hot shot and came out on top twice in weapon firing”, explains Sue.

After that, Kim’s ambition is to train as an Army medic.