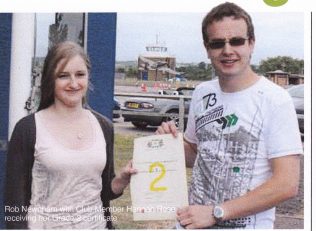 Team Leader Rob Newnham has discovered his hobby has been a great help in his work at our Colemore Row store.

Rob teaches teenagers how to drive at the Under 17 Car Club.

He explains, “It’s something I really enjoy doing but the best thing is that having learnt to drive through the club as a teenager I can now give something back to the club, and I can also use the experience in my job as a Team Leader”.

Cars and driving are Rob’s main interests outside work, and he started driving at the Under 17 Club when he was just 11.  Today, youngsters who are tall enough to drive between 12 and 15 start driving with the Under 17’s and continue with Pathfinder.

“It’s got great benefits and statistics have shown that people who had learned to drive as members of the club had 50 percent fewer accidents than those who had just taken driving tests” says Rob.  “I think it helps that the learning is spread over six years and all the experience you get during that time will generally make you a better driver”.

If Rob isn’t working on a Sunday he will try to get to the club meeting, where he covers skid-pan techniques, slalom 4×4 sessions and motorway driving as well as practical courses such as first aid.

“I’ve found that children respond better than adults to instruction, especially in the club environment, which provides a very relaxed, safe atmosphere”, he says.

While he is not qualified as a driving instructor, Rob has done a RoSPA Advanced Driving certificate as well as his training through the Club.  He adds: “It’s fun and I get a lot of satisfaction helping youngsters to gain confidence behind the wheel of a car”.