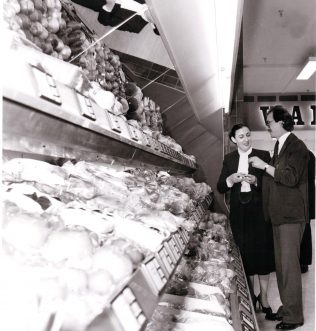 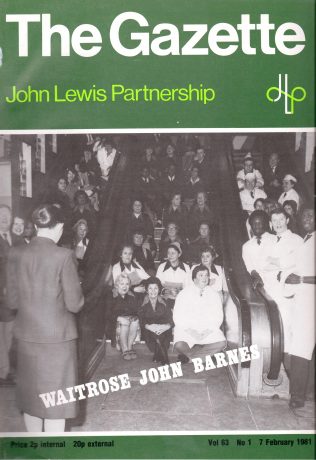 One of the first women to become a branch manager, Pam Roche joined the Partnership in 1972 as delicatessen buyer for the food hall at John Barnes. In 1976 she moved to Brent Cross and worked with Branch Manager, Alan Witkin. “He was very good and treated me as a colleague on an equal footing. I learnt a tremendous amount about running a branch from him.”

In 1979 she became Branch Manager at Gloucester Road. “It was still unusual to have a woman manager. I didn’t have any enormous problems but do think I had to prove myself as much as any man.”,

She was clearly always destined for Finchley Road and remembered the day she heard that John Barnes was closing as a department store and opening as a Waitrose. “I was so excited, I wanted to run it and was put out when a senior colleague said ‘It’s going to be the flagship branch and you won’t get that. You’ve done very well to be a branch manager.’

Pam was offered the position but coping with the running of the branch in the basement while the rest of the building was being ripped to pieces was no easy task. “It was horrendous, and I did ask, ‘Why me?’ She also had to cope with stiff competition “One of my toughest competitors came in one day to buy smoked salmon, and said: ‘Roche, I’m going to get you – we’re opening a big store nearby’. “‘We’ll see,’ I told him.

Mrs Roche retired from John Barnes and the Partnership in 1997.