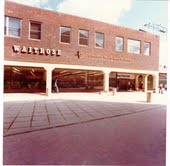 The second branch of Waitrose opened on Tuesday 24 July 1979, after an absence of 27 years. Branch 169 was trading in King Edward Court, an ambitious open-plan shopping centre, with 37 shops, on different levels, managed by Mr D M C Parkin, formerly manager at Kidderminster, staffed by 90 Partners. “There’s an excellent spirit among all Partners in the branch and I’m sure Windsor people will take to us” said Mr Parkin.

This latest Waitrose was the first to be designed with four floors. The lower floor housed the goods receiving, main grocery and frozen foods warehouses. Non-food, fruit and vegetables warehousing and meat preparation were on the next floor. The “ground” floor – which was the “second” floor, at the other end of the site – had the selling area with 10 checkouts, and the provision preparation room, wine store and chiller. The top floor held the offices and dining room.

Partners were talking about “old Windsor”, “little Windsor” and  “new Windsor” when Waitrose opened a shop in the town on Thursday 11th October 2007, not for the first, second or even third time – but for a record fourth time.

BM John Hagues explained: ‘old Windsor’ was the branch that traded from the King Edward Court shopping centre from 1979 to 2004; ‘little Windsor’ was the smaller, temporary unit around the corner into which it moved (this closed on 9th October 2007) and ‘new Windsor’ was the latest incarnation, 21,000 sq ft in size and built from scratch on the site of the 1979 shop.

Denise White – Supermarket Assistant, checkouts, – was the branch’s longest-serving Partner, having spent 24 years at Caleys and 12 years with Waitrose. She was among the 50 Partners who kept ‘little Windsor’ going while the new branch was being built.

At the time of opening, the branch itself was a little different from the norm as the selling-floor and Partner amenities were built at first-floor level above other retailers, while most of the offices and warehouse space lay on the three floors below. With a glazed wall, the branch had an outlook on the town’s famous castle – how many shops could boast of such a view.