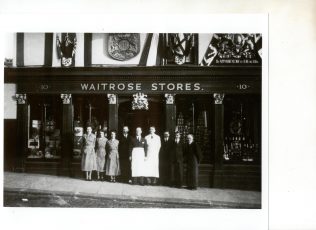 The first branch of Waitrose opened at Windsor in Castle Hill in 1918. This branch held the first Royal Warrant, to Queen Mary, who sometimes used to call in herself, especially for a particular branch of honey soap which she favoured. Once when the regular manager was on holiday, a relief manager was in charge of the shop when the Queen walked in. He was so overcome that he keeled over in a dead faint behind the counter.

The shop was decorated for the Coronation of King George VI in 1937. A photograph of this exists and pictured, in typical business dress of the period, left to right are: Miss Hatton, Miss Beasley, Miss Morgan (Head book-keeper) Mr Cassidy, Mr Haydn Booth (Manager), Mr Howard (Deputy Manager), Mr Grenville Ash, Mr Leslie Worth and Mr Prior, the delivery driver.

This branch of Windsor closed in 1962 but a new branch opened 27 years later, in July 1979. This 69th branch of Waitrose also received a Royal Warrant in 2003 to Her Majesty The Queen, after five years’ service to the Royal household. A right Royal Warrant for a right Royal address: 32 King Edward Court.