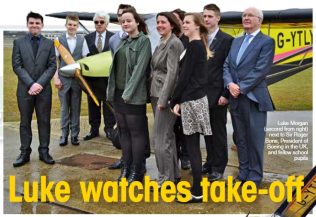 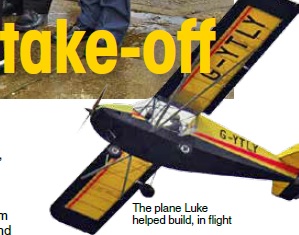 Yateley Customer Service Partner Luke Morgan, saw the results of four years’ hard work earlier this month, when a kit aircraft he helped build, together with fellow pupils from Yateley School, launched into the air at Farnborough Airport.

Luke helped construct the aircraft as part of the Schools Build a Plane  Challenge, which is sponsored by Boeing and the Royal Aeronautical Society, and for which he and his fellow students were presented with a trophy by Prince Andrew last year.

As a result of his commitment to flying, Luke has been awarded with a gliding scholarship by the Royal Aeronautical Society, which will entitle him to a weeks gliding lessons and a year’s complimentary membership of the Air League Leading Edge, the youth element of the Air League.