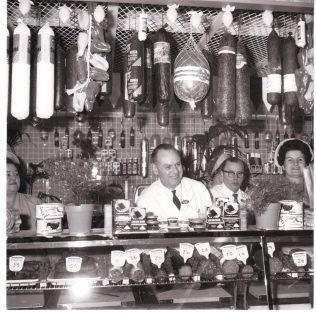 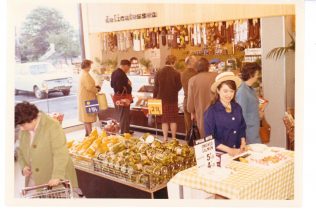 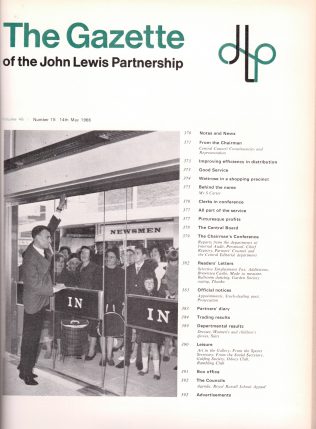 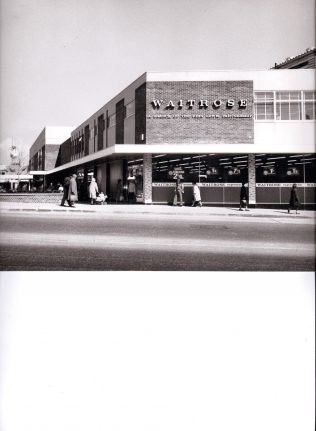 ‘Smoked salmon sandwiches “a la Waitrose” at 4s 6d each, is something that customers at the public house next door to the new Waitrose were able to enjoy on opening day on 10th May 1966. Several experienced Partners from other branches joined Dunstable to help new Partners – three checkout operators from Henley and Hounslow included.

The first in a precinct and the seventeenth Partnership supermarket, Waitrose Dunstable was managed by Mr P D Willetts, late of North Watford. By 10.20am on the day of opening, Waitrose central management, down for the opening, were going outside in twos and threes to gaze with visible pleasure at the large fleet of prams parked by the windows.

The new branch had ninety-five Partners, most joining locally but with a few transferring from other branches. Amongst those was Mrs K Burtwell, a former pay clerk at John Barnes up until 1952.

The delicatessen section proved popular, selling out of Rollmops (at sevenpence each) by 11.30am. Also doing well was the fruit and veg section ‘Dunstable evidently has a liking for ugli fruit, capsicums, aubergines and avocado pears’.

The branch closed on 15th September 1984. The sixty-odd Partners retained a high-morale and many of them looked forward to positions at Waitrose Harpenden which was due to open at the beginning of October. “We’re trading with fully stocked shelves right until the last minute”, said deputy manager Mr David Godfrey. Partners enjoyed a closing party in a nearby pub – “I wouldn’t miss it for anything” said the branch cook, Mrs Margaret Rollings.