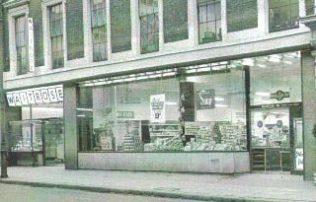 3 GCE’s from my secondary school hardly prepared you for the shopfloor experience in Gloucester Road. Dealing with the rich and famous needed coaching, learning to give each one respect and space, such as Robert Beatty and George Ffitch,who were extremely pleasant in return.There was one TV comedian, however, who turned out to be extremely rude if approached and refused to speak to staff and as such there was an alleged ‘incident’ at the checkout.

Further education started in 1966 with enrolment on a Grocers Institute Foundation Course involving day release at Croydon Tech. The college was opposite what is now a Waitrose but in those days was a traditional Counter Service Sainsbury’s complete with sawdust on the floor.

Having learnt about butter and cheese making, the origins of sultanas and raisins etc, the practical exam was in Smithfield which I passed to become the youngest Associate Member of the Grocers Institute at the time. Following a 10 year gap full membership studies and exams were finally passed in 1978 having commuted from Bracknell to the College for Distributive Trades in Leicester Square 2 evenings a week for 2 years finishing at 9pm for the drive back home to Reading (in my Reliant Robin).

Excellent practical training in the branch was typified by a spell in Provisions of which boning sides of bacon was a key task. Frank (referred to in the Transport section) would deliver sides of bacon once a week, if Roy Kelly, the Warehouse Manager, was off we’d get away with using the belt down into warehouse, but if he was around then each side went on your shoulder and down the stairs into the chiller.

Mr Brown was THE bacon man and was always ‘Mr Brown’, I never did find out his first name. We were shown how to bone out the side with the minimum of meat coming off with the bones. Youngsters, like myself were only allowed to use a string loop to get the ribs out, grown-ups could use a cheese wire, both methods not exactly allowable. When it came to cutting the side into primary joints Mr Brown would peruse the price list to see which cuts had gone up or down since last week eg. If corner gammons went up in price the knife went one way so there was more corner, if down the the other way so there was more of the middle gammon joint.

Same applied to the hock and collar end and what was left was rashered- Collar, streaky, short back, long back (at a premium price), and oyster back then some middle gammon joints became steaks. If you got it wrong Mr Brown’s neck would redden and it was time for a swift exit until he calmed down.

Its worth remembering that all meat and bacon was packed, weighed and labelled in the branch, (along with some cheeses) there were no sell by dates until the mid 70’s (trialled at Tilehurst around 1975).

Cleaning the slicer involved a knife, a cloth and the revolving blade…… If you’re from ‘elf n safety, look away now !

During the annual Taste of Poland week a side of bacon was a central feature and we chose smoked as the unrefrigerated window faced west (next to the exit door in the photo). On the odd occasion there was insufficient smoked a ‘green’ side (unsmoked) was put in instead. As it was usually August the smoked side survived the week reasonably well and the aroma was ‘acceptable’.

Incidentally the Taste of Poland week was organised by Julius Englert, Display Manager for Waitrose at the time who was from Poland.

Thankfully I never made into the Meat prep as big knives and band saws bring me out in a cold sweat ! The meat team did have one very cool member, to spare his blushes we’ll call him ‘Tom’. He loved his pipe and was a demon crossword solver. His speciality was splitting lamb carcases into primal joints and he would disappear into the chiller with 100 of ‘em and a pipe in his pocket …………..

Then there was the Wines department, another time perhaps………..