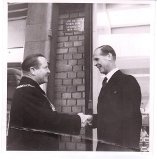 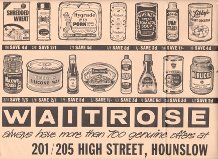 Waitrose Hounslow opened at 201-205 High Street, on Tuesday 6th November 1956, its third and largest supermarket. Originally the site of the Town Hall, previously it had been the Empire cinema, the side walls of which had been incorporated into the new building.

To commemorate the site of the Town Hall, Mr O B Milller, Partnership Chairman, unveiled a plaque, welcoming the Mayor and Mayoress “We have been trading in your borough in a small shop for some years, but this is our first large-scale undertaking here. This business, is owned by all the people who work in our organisation and all the new workers here will become Partners, just in the same way as all the other twelve thousand members.” The mayor replied: “I would like, Mr Miller to welcome you to Hounslow High Street and to say we are glad to have you here. You look like being a very definite acquisition. Our wives are just itching to have a look round your shop!”

The fascia above the doorway was of pearl grey vitrolite carrying the sign “Supermarket” in red and white script lettering and two vertical lit signs of “Waitrose” in black and gold perspex lettering on a lime-yellow Perspex background gave the appearance of being lit, even in daylight.

As well as wide range of foods being on offer, both side walls were dedicated to non-food goods – nylons, hot water bottles, toiletries and toys. The shop could be quite a family occasion with mummy getting on with the family shop while little boys examined Dinkie cars and trumpets