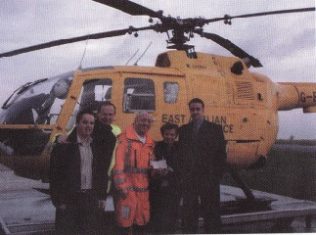 An air ambulance service is really flying after being awarded a cheque for £1,000 from the Charities Committee.

The son of Norwich Partner Sue Whitmarsh, who works on checkouts, was involved in a motorbike accident and he was picked up and taken to hospital by the East Anglian Air Ambulance team.

Sue wanted to raise funds for the Air Ambulance because of the help they gave her son.

The Air Ambulance is a charity, so Sue told her story to the Charities Committee asking if they would make a contribution.