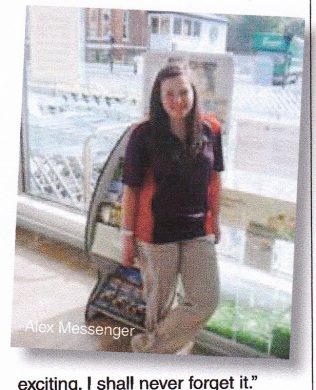 This summer has been one of the best that Jesmond’s Alex Messenger can recall, as the 19-year-old found herself selected as one of the Games Makers at the London 2012 Olympic Games.

The 19-year-old had volunteered for the chance to help out at the Games two-and-half years ago when she was still at school, attending an interview in 2010. “I just wanted to be a part of it all – I had no idea what I would be doing if I was accepted.

In December 2011 Alex learnt that she would be a volunteer and then found herself assigned to work at the Archery event for 10 days.

“I didn’t know anything about archery and I though it might be a bit boring but now I think its great – we all had a chance to try it ourselves and I discovered I was actually quite good at it.  I wouldn’t mind taking it up if I can”.

Alex stayed with family in London and describes the Olympic experience as “amazing”, she was particularly delighted that she was able to attend the Closing Ceremony.  “It was exciting being in London during the Olympics – the whole of London was really exciting.  I shall never forget it”.