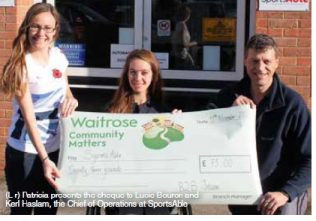 In the spirit of London 2012, Business to Business (B2B) UK Accounts Administrator Patrica Ellis, ran a sweepstake on the London 2012 Olympic and Paralympic Games, raising £73 in aid of SportsAble, a sports disability charity that has helped train Paralympic athletes.

Partners in B2B paid £1 each to pick a country and at the end of the London 2012 Games, all the medals per country were tallied up.  The winner, Category Manager Dominic Melliss, picked eight countries – which won 559 medals between them – and the charity received half of the winnings, with the remainder being divided between three Partners.

Earlier this month, Patricia presented the cheque to the centre – which has unique Waitrose connection.  Seventeen-year-old Lucie Bouron, the daughter of Centre Manager, Jennie Bouron, belongs to SportAble and happens to work part-time on the check-outs at our Bracknell branch.