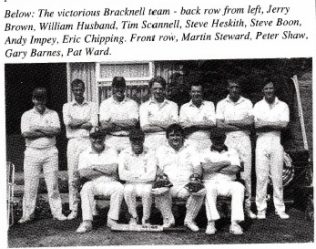 The final of Waitrose cricket tournament, held recently at The Odney Club, saw the Bracknell team emerge as winners over Beaconsfield.

On a fine day, with the pitch in really good condition Bracknell won the toss and put Beaconsfield in to bat.

After about six overs, the wickets started to fall and Beaconsfield was still not scoring well, due to some excellent fielding and bowling by Bracknell.

This changed slightly when Alan Hancox came in to bat and started to hit out.  He scored a magnificant 30 runs – mostly boundaries – before being bowled by Andy Impey.

After his departure, the runs dried up again and the wickets started to fall fast.  Beaconsfield was finally all out for 59 runs.

As it was too early for tea, Bracknell decided to bat straight away.  Gary Barnes and William Husband opened for Bracknell, with Gary getting 23 runs before being bowled out by Steve Millbank.  William followed shortly after.

This left Martin Steward and Andy Impey at the crease.  Martin protected his wicket while Andy went for the runs.

Andy made a quick 19 before being bowled by a magnificant ball from Daryl Smith.

Peter Shaw came in next and played a captain’s innings, scoring the few runs required to give Bracknell a well-deserved win.