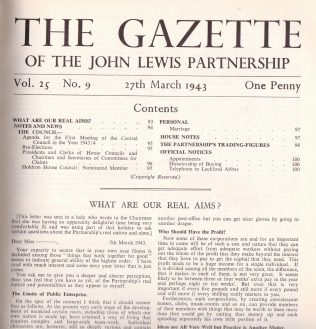 The Bees & Tees group of stores was acquired by the Partnership on 29th March 1943, with shops at Harrow, Kingsbury, Edgeware and Hanwell. Gazette readers were told that all the shops were “nicely equipped and…. situated in districts which fit in reasonably well with our class of trade, and with our buying and distribution. We have every reason to believe that the time will not be far distant when each will be adding its quota to the Partnership’s profits”.

A 1954 Gazette article on the Partnership’s food trade described the shops as of the ‘neighbourhood’ type to be found in small shopping parades. “Rationing, controls and bombing (had) made the smaller shops … much more popular”.