Celebrating a milestone in 1969 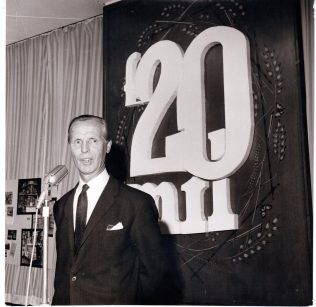 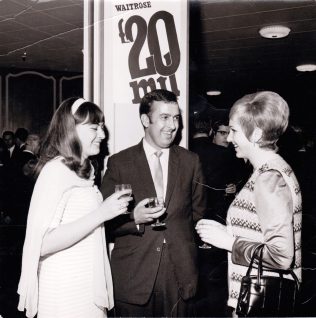 “Twenty million pounds isn’t really very much of a figure you know”, said Sir Bernard Miller, “It’s more of a starting point. Now we must aim at reaching the next milestone, that of £50,000,000”. But there was a twinkle in his eye as he said it and he continued, “Congratulations and good luck to you all”.

Sir Bernard was speaking at the party held to celebrate Waitrose’s first £20 million turnover in one twelve-month period. Some 400 Partners gathered in the restaurant at John Lewis on the 14th October 1969. Half of them were management and members of the Branch Council or Committees for Communication, and half were selected by ballot. Amongst the successful ballot winners was sixteen-year old Donald Jones, trainee cutter of provisions at Fleet, who had joined the Partnership that year. Attendees enjoyed a well-stocked buffet supper and drinks and perhaps most of all the chance of meeting each other – something which is seldom possible in a business like theirs, with shops scattered from Birmingham to Brighton.

For much of the time they talked shop. But perhaps that was understandable at a party held to toast the effort which every one of them had put into gaining these figures, as Mr S Carter, Director of Trading, Food, said when he introduced the Chairman. It was a result achieved by determination, hard work, and loyalty, he said, and he offered his personal congratulations also.