zoom
Under the watchful eye of Davey, the girls took their first strides in beautifully flowing sari's 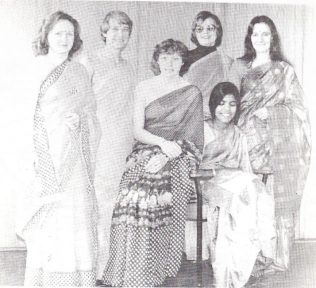 The story is about five Waitrose girls who were prompted one day to find out for themselves what it is like to wear a sari.

Davey Roy – Bracknell Stock Office to be precise – was born in Sri Lanka, which was known at one time as Ceylon.  Davey always wears a sari and frequently attracts admiring glances – not just from us mere males but also from the ladies who work in Bracknell Head Office.

We first plucked up courage to ask her the average number of saris that a well dressed lady like Davey might have, “Upwards of seventy”, she replied.  “You never grow out of them, and the designs always remain fashionable”.

I asked her if some of her colleagues could try some of them on for themselves.  The end results of all this can be seen in these pictures.