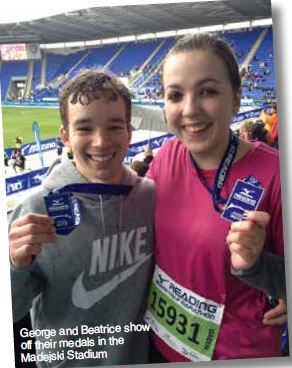 Three Partners, George Winterbourne (Newbury), Beatrice Allen (Partner Services) and Geneive Allen (Abingdon), were complete novices when it came to running.  However, that didn’t stop them from signing up for the Reading Half Marathon on 17th March – or the Bracknell Half Marathon which they’ll tackle next month.

The reason?  Their goal is to raise £1,600 for St. Michaels Hospice in memory of George’s close friend Mark Yockney.  He passed away from pancreatic and bowl cancer in August last year after developing it just two months earlier.

After hitting the streets of Reading, George his girlfriend Beatrice and her sister Geneive have raised £600 and aim to bring in an additional £1,000 from the next race.

Despite the bad weather, George achieved a time of 2 hours with Beatrice following in 2 hours 27 minutes.