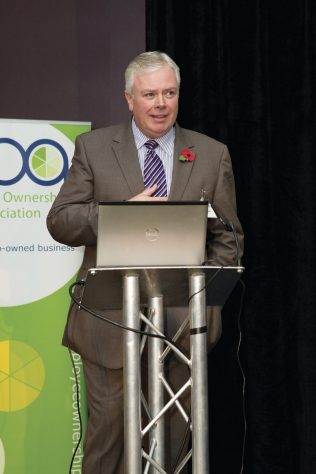 The achievements of two retired Partners in promoting the cause of employee ownership were recognised last month in the prestigious Philip Baxendale Awards sponsored by the Baxi Partnership and the Employee Ownership Association (EOA).

Stephen May, the Partnership’s former Director of Personnel, was presented with the inaugural Philip Baxendale Fellowship Award for his outstanding contribution to the cause of employee ownership. Stephen, who retired in 1997, was described as a “hero of the employee ownership movement, unshakeable in his conviction about its value”.

Charlie Mayfield, President of the EOA as well as the Partnership’s Chairman, said that Stephen had championed the benefits of employee ownership, “not as a fusty concept but as an integral part of a modern, successful business”.

Campbell McDonald, Director at Baxi Partnership, commented: “The Partnership is a formidable presencein the employee-owned sector, and it is fantastic to see the strength of the business recognised.”