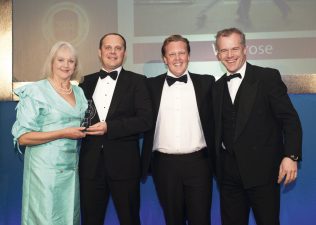 The Waitrose Wines, Beers and Spirits department picked up a host of accolades at the 2012 Drinks Retailing Awards. The team won awards for Drinks Buying Team, Multiple Beer Retailer, Supermarket of the Year and, for the first time, Champagne Retailer of the Year. Dee Blackstock MW, Buyer, Champagne & Sparkling Wine, won a Lifetime Achievement Award.

Dee has worked for the Partnership since 1991, starting off as Assistant to the late Julian Brind MW, who was then Head of Wine Buying. She has bought Champagne and sparkling wine since the mid-’90s. She describes the Lifetime Achievement Award as “a huge honour”.

“We’re delighted to have won these four awards,” says Pierpaolo Petrassi
MW, Head of Beers, Wines, Spirits & Tobacco. “They are valuable industry recognition not only of what we do, but how we do it.

“We are also all especially proud of Dee and of her award – she is a true icon of the drinks retailing industry. To have won the inaugural award for Champagne Retailer of the Year exemplifies Dee’s continued determination to maintain the Waitrose lead in her specialist area.”