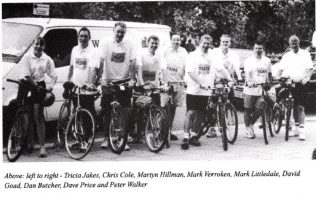 A group of Bracknell Partners from Selling Support, successfully completed at 58 mile cycle ride from London to Brighton – for charity.

The cycle ride in aid of the British Heart Foundation, is an annual event which leaves fron Clapham Common and finishes at the seafront in Brighton!

The ride in which more than 27,000 people took part, took the group of nine Partners through countryside, towns and villages.

Selling Support Desk Advisor and team member Mark Littledale, said: It was an awesome experience to be part of such a large group of cyclists speeding their way through the streets.

We eventually arrived back at Bracknell at around 8.30 pm tired but with a sense of achievement.

Between us we managed to raise about £1,600 for the British Heart Foundation.  The whole event should raised in excess of £2 million.