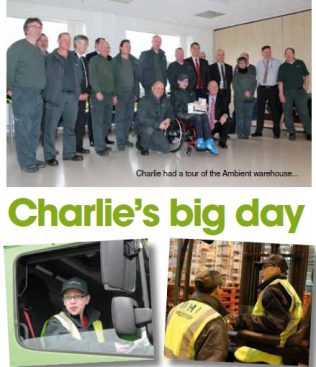 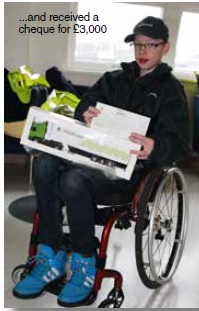 Bracknell’s Supply Chain of almost 900 Partners decided to use Waitrose 75th anniversary in the Partnership as an opportunity to make a difference in the community.

Thanks to their effort, terminally ill 15-year-old Charlie Crick was able to put a tick against another wish on his ‘to do’ list, after a visit to the Bracknell site.

Charlie who suffers from a heart condition, curvature of the spine and arthritus, and has endured more than 50 operations, was given a VIP tour of the site.

General Manager, Bracknell RDC, Robin McCarthy, says Charlie’s visit was “a very moving day for all of us”.  He said “Partner Voice and Forum reps did a hugh amount of work to ensure that we did this.  We gave Charlie a tour of the Ambient Warehouse that included a demonstration on how to use a fork truck and he was taken for a drive around Bracknell in a Waitrose livery truck.

“Charlie is an incredibly courageous lad and when I presented him with a cheque for £3,000 on behalf of my team it was really heartfelt”, said Robin.  Charlie was also presented with a Waitrose uniform and a vintage model of a Waitrose truck.