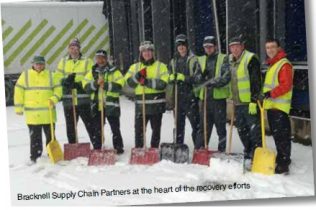 Hundreds of school’s closed up and down the country.  Heathrow came to a standstill and roads became inpassable with freezing temperatures and snow swept into many regions last week – but Waitrose Partners ploughed on regardless ensuring business continued as usual where possible.

Out of all of the RDC’s, Bracknell was hit the hardest with six to eight inches of snow on Friday of last week.  “Partners were clearing yards all day to keep the movement of vehicles flowing around the site”, said General Manager, Robin McCarthy.  “Our drivers were outstanding as it was a major challenge to get to many branches in the South and Wales, but they all got through in the end.  Partners were at the heart of the recovery and I would like to thank them all for their fantastic efforts”.