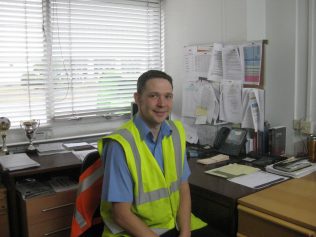 Darren Gosling started in the Partnership at the age of 16, straight from school, to start a three year Motor Vehicle Mechanic course.

After six years as recognition of his achievements, gained an associate grade of membership of the Institute of Royal Transport Engineers (IRTE).

Now 23 years later, Darren still works for CVW and with hard work and loyality over the years has risen to Deparment Manager, Bracknell Workshop.  His position now means that he oversee’s the training of all new trainees, so know’s exactly how they feel.

When asked what his years at CVW have been like, Darren said: “I have been lucky enough to work with really good Partners over the years, especially those in CVW who were very helpful.  I also had the support of Robin Buckland, Bracknell Staff and Training Department and Mike Street, Assistant to the Workshop’s Manager.

Taken from Interview with Darren on 24 September 2012