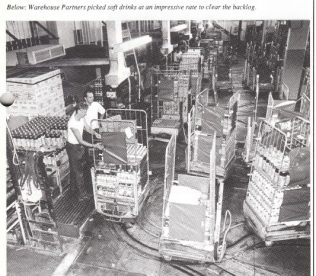 This summer’s heat wave has had an enormous influence in our sales, with vast quantities of soft drinks and bottled water being brought by customers in an effort to keep cool.

So when a problem arose in the main warehouse, Bracknell last week, halting the picking of soft drinks and water for eight hours, Partners had to work flat out to get back on course.

The quantity of cases of soft drinks being ordered in the particular phase at Bracknell was too large for the system to handle.

So the magnetic tape which holds all the information of stock to be picked had to be re-written at Clipstone Street, after failing to cope with the amount of cases input onto it.

Partners were picking at a pretty impressive rate.  The first couple of hours were really important, and they pulled out all stops to catch up.

Inevitably the back log caused many problems in the transport department, which had to fit the delayed branch orders into later or special deliveries.

Arrangements also had to be made at the branches to receive the goods, sometimes as many as two to three trailers of liquid.