Lorry Driver of the Year competition 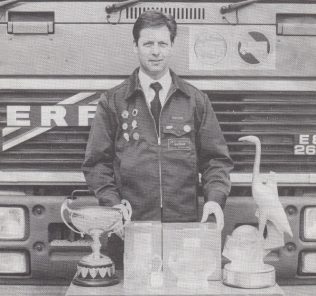 On Sunday 13th September 1992, two Waitrose drivers took part in the National finals of the Lorry Driver of the Year competition.  Also flying the Partnership flag were two drivers from John Lewis, Blakelands.  The Waitrose drivers competing were Eric Chipping and Keith Marsden and the Blakelands drivers were John Northend and Alan Casling.

To qualify for the National Finals drivers have to win through required heats which are held across the whole of the UK.  Driving skills, practical and theoretical knowledge are tested and the drivers with the lowest penalty points against them qualify for the National Finals.  Competition standards are extremely high and a high degree of skill is required to qualify.

All of the Partnership drivers performed superbly throughout the finals.

But without doubt, Eric Chipping, Waitrose, made the day his own to become Class Four champion, 4th in Lorry Driver of the Year, and best Articulated Vehicle Driver.