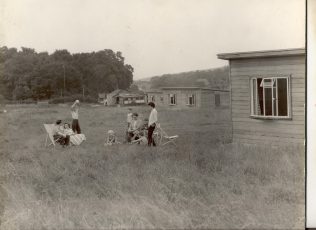 It was in 1934 that Spedan Lewis mentioned in the Gazette the idea of a camp at Leckford, but the plan did not come to fruition until 1937.

In its first experimental year, Mr Lewis wrote ‘the campers will be lodged in the buildings that were formerly for the chicken farm’. (They were wooden huts measuring 20ft by 15ft.) ‘They stand a long way apart. The tenants of each will have plenty of privacy in which to talk freely of their neighbours  without apprehension of processings for libel!’

Accommodation, bedding and laundry were free and Partners paid just for their food. Spedans aim was ‘that it would make a good summer holiday possible for Partners who, because they have a number of children and not much money, find it difficult to get during the holiday season, satisfactory accommodation at a reasonable price’.

Over time the arrangements were much improved, including flush toilets in each chalet (1968) and showers and were built into the main hut. However, it seems the most welcome change was the introduction of new softer mattresses (Jonelle) in 1967.