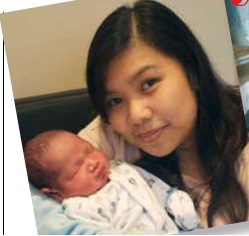 “I delivered a baby on Friday” says Canary Wharf’s Mike Buckingham, who still can’t believe what happened.  Recalling the events at about 6 pm on 9 November.  The Department Manager Customer Service found himself helping customer Daphne Bolus to give birth to her 7.3 lb son Mathew just within the entrance to Waitrose. ”It was the most amazing experience and I’m delighted that both mother and baby are doing fine.

Daphne and her husband Timothy, a former Partner of Canary Wharf, says, “We could never have thought that having a baby in Waitrose would be such a memorable experience and it will be part of our lives forever.  We want to offer our deepest appreciation to the management and staff for their exceptional service and kindness to our family”.

The couple had always intended to name their second son Mathew but have now chosen to give him the middle name of John, after John Lewis.

The couple had gone to the nearby hospital at 2 pm when Daphne’s waters had broken but she had been sent home as it was felt that she wasn’t dilated sufficiently to give birth.

The couple decided to meet Timothy’s Aunt, checkout Partner Ann Regala during her break at a nearby restuarant and had returned to the store with her.

Mike was called to help Daphne when she started to feel discomfort.  About ten minutes later she went into full labour. We made sure she was comfortable and arranged screens round her for privacy.  I asked the centre to put a call out to see if there was a doctor or nurse in the centre, and also to ring 999, who relayed to me what to do while waiting for them to arrive.  Two first aiders on the Canary Wharf team also helped as the mother gave birth, just ten minutes after going into labour.  Shortly after, a nurse arrived, then the ambulance.