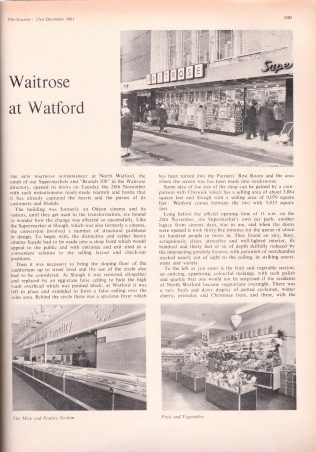 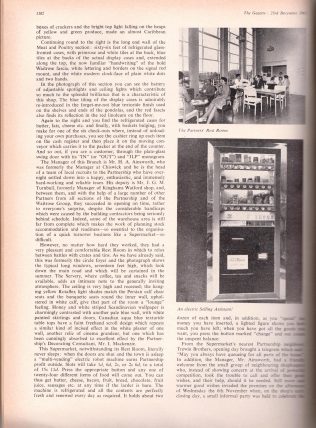 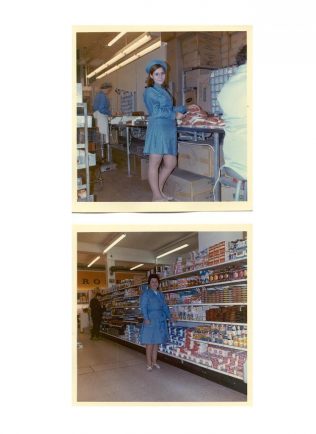 The Gazette announced that the Partnership had entered into an agreement to lease the old Odeon Cinema in St Albans Road, North Watford, on 19th August 1961.

Waitrose North Watford (Branch 108) opened on Tuesday 28th November 1961 with 32 Partners, as well as a number of Junior Partners working weekends only. The Manager was Mr H A Ainsworth, and his deputy, Mr J G M Turnbull. Women Partners were to wear blue nylon overalls – ‘an experimental Waitrose overall which was proving very popular in the branches in which it was being tried.’

The branch opened its doors with such instantaneous ready-made warmth and bustle that it has already captured the hearts and the purses of its customers and friends.

A small, informal party was held on early closing day on Wednesday 6th November, to celebrate the opening. Those who attended included: the Chairman, Mr O B Miller, Mr P May, Brigadier M S K Maunsell, Mr G C Walton, Mr H Legg and the Waitrose MD, Commander W D Shaw. After the guests had gone, Partners had a dance in the rest room.

The branch closed on 24th October 1987, as long term prospects for good trading were not sufficient to justify the expenditure to bring it up to date. The closure date was timed to coincide with the opening of Waitrose at Northwood to give Partners the best opportunity of alternative long-term employment as close as could be to their present branch.

Please see Gazette article for full account of the opening of this branch.