Analyst with a punk rock soul 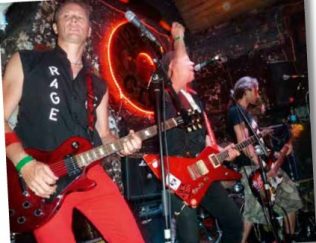 Graham Pegler’s day job as a Supply Chain Configuration Analyst is relatively sedate.  By night however, all that changes when he takes to the stage with punk band Rage DC.

A rhythan and lead guitarist, and a backing vocalist, Graham joined the four piece band, formed by school friend Lonic, a decade ago.

So far Rage DC has recorded two EP’s and three albums including current release, Attitude and Fortitude, at a professional studio in Wokingham.  “Our lead singer/lead guitarist does most of the writing but we all contribute”, explains Graham.  “That’s probably down to me being a father of three – and I help with my son’s football team, too!

Never less, Graham still finds time to support music making at Head Office, guesting with house bands the Hound Dogs and FirehouseBlues, as well as rehearsing his own material in the sites music room.