Finding a goal in life 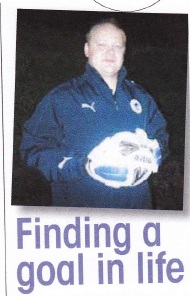 Football is a life-long passion for Richard Smith, A Chester Foregate Street part-timer whose job in Convenience has halped him to achieve a lifelong ambition.

Richard – father to Charlotte, ten and Alfie, eight – had given up playing football within the Northern League about three years ago, so when his children’s school appealed for volunteer football coaches, he was more than happy to help.

He was given the opportunity to attend Football Association coaching courses and, as well as training nine-to-eleven year-olds at Norley Primary School, trains three other teams including Chester FC’s newely formed women’s team.

He has been able to arrange his shifts around the courses, coaching and matches, thanks to the support he has at work.  “Any time I mention anything about my coaching, managers and colleagues ask me about it and really encourage me”.

Richard is very proud of the women’s team he coaches.  “It’s fantastic to be involved in something new and the girls are just as good as the boys,” he says.

He has also found unexpected rewards coaching children.  “The big thing I enjoy about coaching kids is helping thenm to enjoy the game the way I did when I was their age”.

“Now I just want to take my coaching to the best level I can for as long a I can,” says Richard.